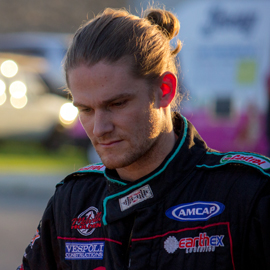 Jason Kendrick started racing with no prior race experience, except a few years of BMX. Jason started straight in an open class sprintcar and showed promise early on. He always had great speed but just had to learn the race craft, once that came, the wins came with it.

Jason crewed for 7 years on the Kendrick Racing Team, in this time he built up the knowledge required to rebuild his own car as well as understand how the car mechanically works. This enables Jason to give feedback in a way that a crew chief can understand & in turn have a faster race car.

In 2011-12 after claiming some minor wins in previous years Jason started a dominant second half of the season with a win at Quit Bunbury Speedway on Boxing Day and proving it was no fluke, won the Christmas Cup show

at the Perth Motorplex the following night. With confidence high he claimed two more big races before the season’s end including the time-honored WA Sprintcar Championship against an international field. His stellar season was rewarded at the WA Sprintcar Association awards night, being officially presented with the WA

Championship, along with the Most Feature Race Wins trophy, Achievement Award and Bonza Bradford Memorial Trophy for points from time trials, heats and feature races.

Since that breakthrough year Jason has pushed his win count into the double figures, as well as capturing another WA Sprintcar Championship.

Jason has gone from being a rookie with potential to a serious threat every time he enters a Sprintcar race in this country. Having the taste of success has made Jason hungrier than ever for victory and with the equipment and team he has behind him the wins are starting to tally up.