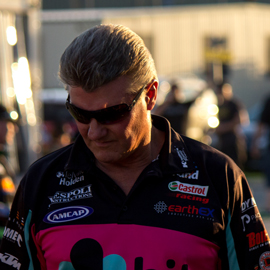 Geoff Kendrick established himself in the sport of motor racing in his late teens. Since that time, he has not only owned one of the most successful race teams in Australia, he also been behind the wheel of a large number of the race wins in a number of categories. With experience in V8 Supercars, Sport Sedans, Open Class Speedboat, Jet Sprint Boat and even Drag racing, its not hard to work out there is a serious amount of race knowledge he brings to the table.

Geoff’s background is as an automotive engineer and machinist as well as a first class mechanic who has been building top race motors for more than three decades. Geoff owns and operates his very successful Kendrick Automotives and has been for the past 32 years. His in house developed race engines have won a huge number

of events up to the world level. This development that he now keeps in house is part of the reason for the

Geoff had also been the driving force behind the sport of Speedway in recent time. Geoff is one of the founders and current Chairman of the hugely successful Sprintcar Entrants Group – AHG Sprintcar series, the most

successful domestic Sprintcar series in Australia. Geoff is also a former chairman and current board member of the Sprintcar Association of W.A.

On the National level he was the Chairman and board member of Speedway Australia, World Series Sprintcars,

the Speedcar Pro Series and the National Super Sedan Series. Geoff was one of the few responsible for the Free to Air coverage of World Series Sprintcars, as well as bringing large corporate partners on board.

Geoff is one of the reasons why the sport is where it is today, now he has sent the sport in the direction it needs

to go, he is concentrating on his team and building on the success it already has.