HIT92.9 KENDRICK RACING TEAM CLEANS UP AT THE PRESENTATION NIGHT 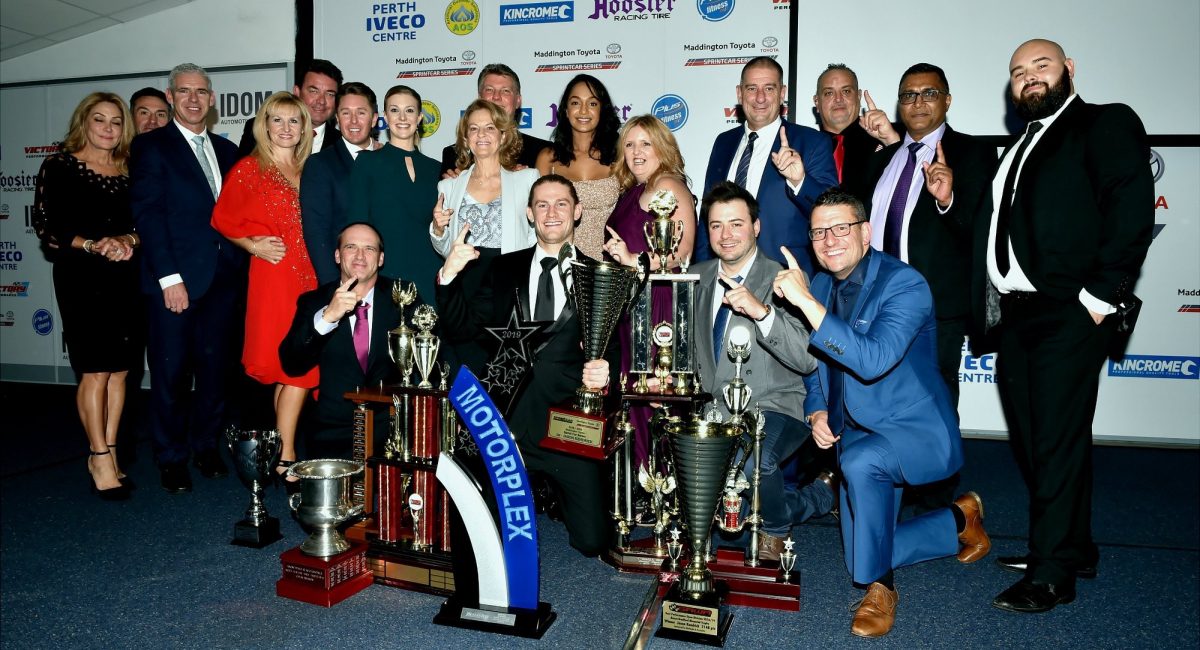 That is a quick summary of Jason Kendrick’s summer in the 2018-19 WA Maddington Toyota sprintcar season that has now wrapped up after the awards night was held at Burswood on Swan last weekend.

And at the awards night Jason was also presented with the Bonza Bradford Memorial trophy for the Best Performance in the open division, the Most Feature Race Firsts (4), the Feature Race Champion award and the Perth Motorplex Driver of the Year award.

And finally, the hit 92.9 Kendrick Racing Team was presented with the Best Presented Crew award.

“It’s been a big season and we could not be more proud of Jason and the entire crew for the huge effort they have put in this year,” said team boss Geoff Kendrick.

“Behind the scenes there have been a lot of people putting in a lot of work so we can race and be competitive every time we hit the race track.

“Thank you to Jason Mansell for the massive effort he puts in, not only at the track, but in between races back in the workshop – and the support we receive from the rest of the crew.

“And a special thanks this year must also go to Gemma Shannon for going out and helping us with our marketing and securing more corporate support.

“We are now  in the process of planning next season so we can go out and hopefully build on what we have already established.”

Kendrick confirmed they would be aiming for a third straight championship but also hinted that a mid-season tour of the Eastern States was in the pipeline.

“We are confident we can go east and compete with the teams over there, but to make that happen we need to work hard right now on our preparation and planning,” Kendrick said.

“As we wrap up the season, I want to say a huge thanks to everyone who has come onboard as a corporate partner for the team this year – to us the people who back our team become more than sponsors – they become part of the team and they become great life-long friends – so to everyone involved – thank you.

“And to the race fans – also a big thank you – we hope we have enjoyed the season and we look forward to the support of everyone again when we crank up the new season later in the year.”