HIT92.9 KENDRICK TEAM HAS A WINNING START TO THE YEAR 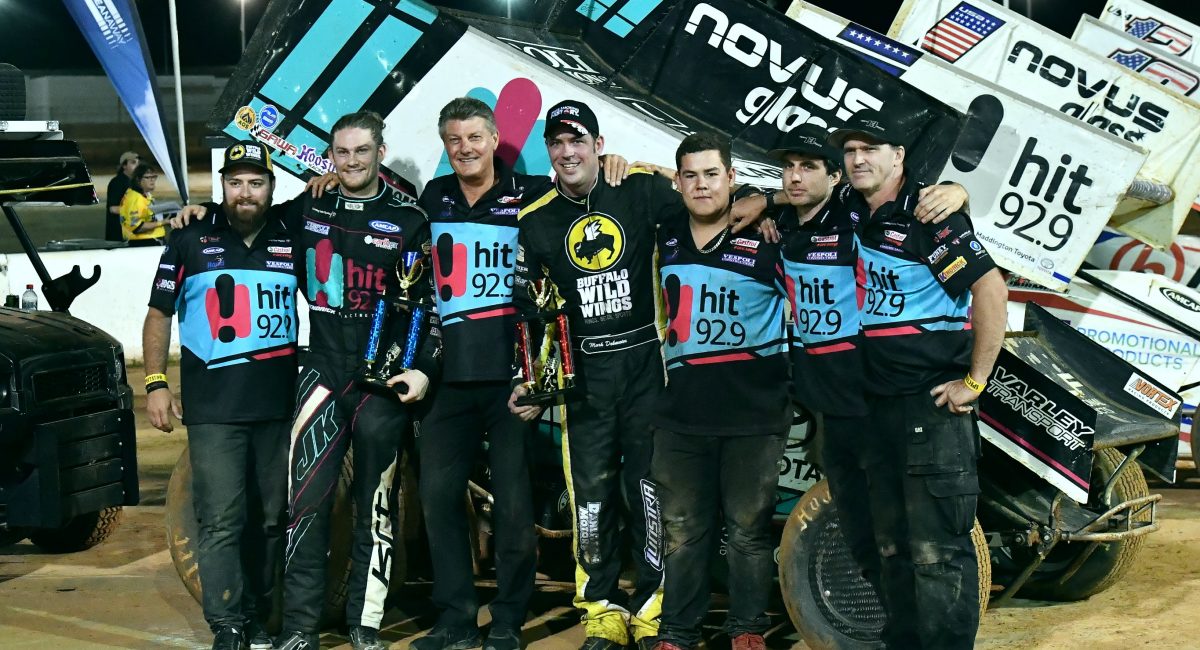 AS the hit 92.9 Kendrick Racing Team prepares for another round of the Maddington Toyota Sprintcar Series this weekend, team boss Geoff Kendrick hopes that everyone had a Merry Christmas, as well as a good start to the new year.

It was a good festive season for the team, culminating in Jason winning the four-night USA v WA Sprintcar Speedweek that was held at the Perth Motorplex on two occasions, as well as at Collie Speedway and Bunbury Speedway.

“Jason put the car up the front for each of the four feature races and unfortunately on a couple of those occasions we didn’t have the car right and he finished down the order,” Geoff said.

“But when you race four nights in quick succession, you learn a bit each night and on the final two nights Jason won the feature races – one at the Perth Motorplex and one at Bunbury Speedway – and as a result he won the Speedweek title.

“It’s a series that we have won before with Ron Krikke so it was good to get a win with Jason.”

The team was kept busy by also fielding a car for one of the three Americans in the field – Mark Dobmeier – who represented the team in the Telf Promotional Products #92 well.

Unfortunately on the first night Mark destroyed a uni joint that the team initially misdiagnosed, replacing other equipment on the car.

He then charged through the pack and up to fourth before an electronic bleeder failed and the left rear tyre went flat.

This was followed by a fourth at Collie and then another DNF back at the Motorplex after an altercation with another car late in the feature race.

It all came together in the final round, with Mark finishing second to Jason in a 1-2 finish for the team.

“That last night was the icing on the cake and we thank Mark for being part of the team over that period of time – now we head to the Perth Motorplex this Saturday night for the next round of the Maddington Toyota Sprintcar Series,” Geoff said.

“We are excited about the next couple of weeks before we have a small break and regroup for some big races that come our way in February.”