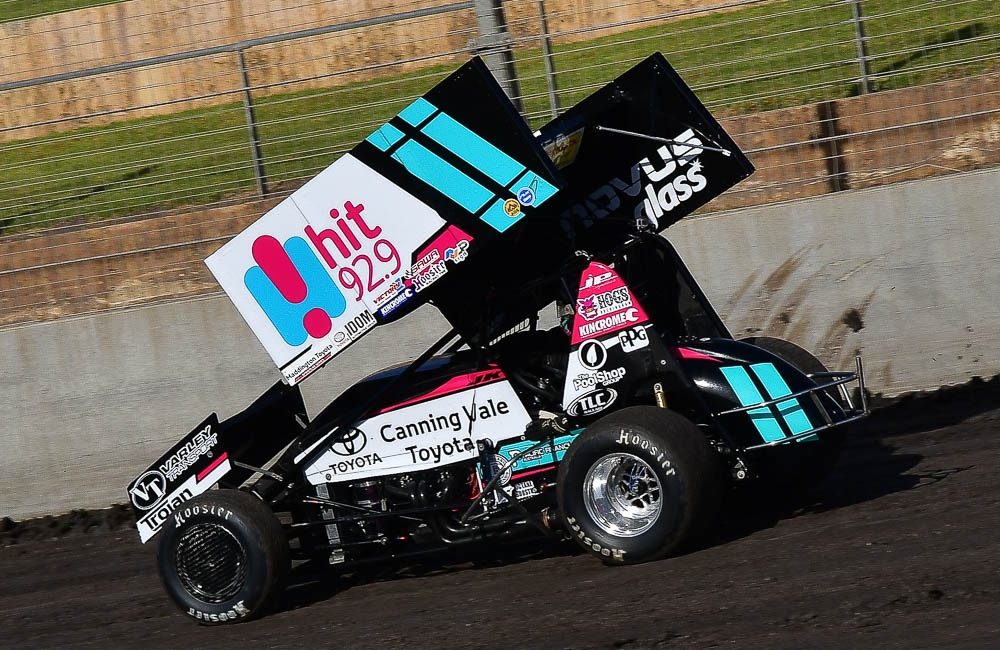 It’s been a big start to the racing season for the hit92.9 Kendrick Racing Team and it is set to get even bigger in coming weeks.

The team heads into the festive season of racing on the back of the WA Sprintcar Championship held at the Perth Motorplex a couple of weeks ago.

Jason was the quickest cars in the second half of the 30-lap feature race and mounted a couple of challenges on the leader that didn’t quite pay off.

“Jason made two big mistakes when he tried to slide the leader on two occasions and slid up on him a corner too early,” said team boss Geoff Kendrick.

“It was a good race and we believe the win was there for the taking.

“Unfortunately on one occasion Jason got to the lead, only for the caution lights to come on and we had to go back to second.

“Then in the dying stages there was a red-light situation which saw the race declared – it was a shame that it finished that way as championship races should always be run to their full duration and it would have been a good spectacle for the crowd.

“But in saying that it was another podium result and now we are getting ready for Speedweek.”

The four-night showdown will be held at the Perth Motorplex on December 26 and 28 before moving to Bunbury on January 1 and Albany on January 4.

Kendrick Racing Team will be extra busy over this period – also campaigning a car for American Bud Kaeding – one of three USA drivers locked into the field.

“Bud is an excellent driver who has an impressive record that speaks for itself,” Geoff said.

“He has claimed more than 250 feature race wins in his career and we are looking forward to him putting on a show.

“Jason is of course the defending Speedweek champion and we would like to see both of our cars at the top of the points at the end of the four nights of racing.”

Geoff said everyone in the team was looking forward to racing against a star-studded field of local and USA drivers and given the quality of the field, said anything could happen.
“We are ready for the next challenge and getting some good results for our corporate partners and supporters.

“We would like to wish everyone a safe and Merry Christmas and a Happy New Year and we look forward to seeing everyone at the race track.”