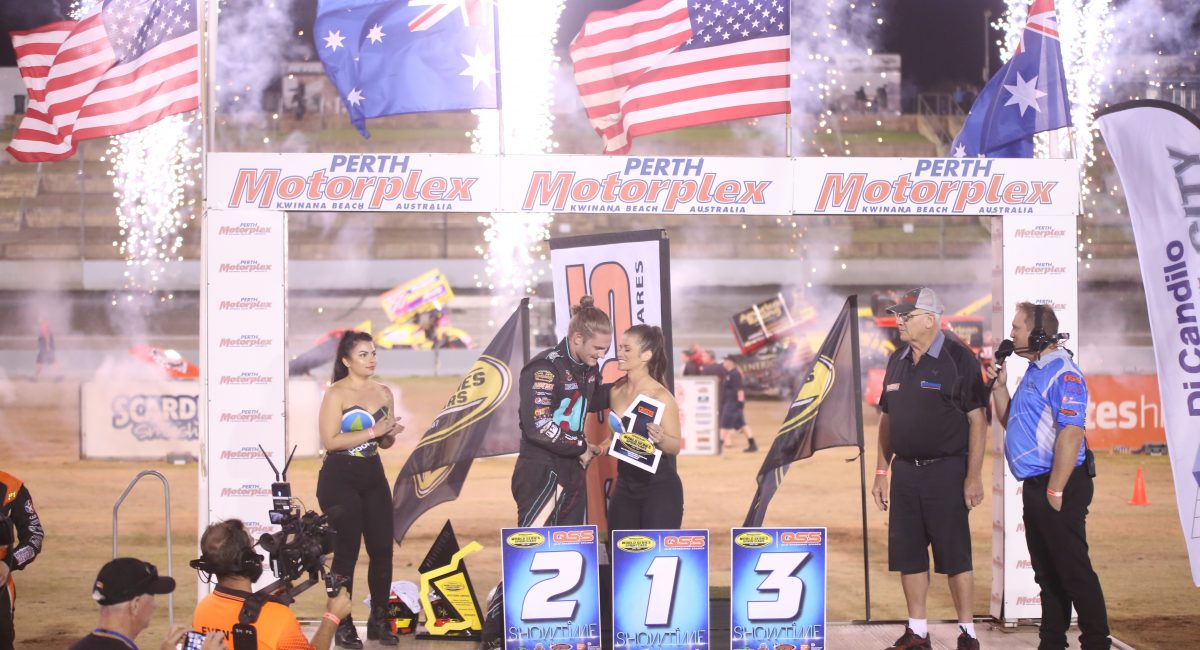 THE hit 92.9 Kendrick Racing Team created history at the Perth Motorplex on Sunday night at the grand final of
World Series Sprintcars.
Jason Kendrick did what only a small number of WA drivers have been able to do since WSS started many
years ago – he won a feature race against the best of the best.
But it wasn’t just any feature race – it was the grand final of the series that featured the current national and
WSS champion and former national and WSS champions.
The win capped off a solid weekend for the team that at one stage also looked like a podium result was going
their way on the Saturday night round as well.
“We had a rough night on the Saturday night and had to change a motor and despite looking fast in the feature
race, we dropped a sump plug and didn’t finish the race,” team owner Geoff Kendrick said.
“We started fresh on Sunday night and everyone was feeling confident after setting the pace on the first night.
“We didn’t qualify as well on Sunday night and found we had a small problem with the car that we fixed after
the first round of heats.
“From there the car was great and we got through the dash to start up the front.”
In the feature race Jason was tucked behind two other drivers who were caught up in an incident and crashed
out.
Jason was lucky to avoid any contact and then on the restart he set sail for home in a popular home-town win.
“That’s on top of the list,” Jason said after the win.
“The World Series Sprintcars finale is a pretty big race here at the Perth Motorplex.
“To have my name on the trophy and have a World Series Sprintcars win is unreal.
“That’s what we came here for.”
The team is now preparing for a big two nights of racing at Quit Bunbury Speedway for the Krikke Boys Shootout
this Saturday and Sunday nights.
“We are going down there looking for a strong weekend against a strong field where once again the competition
will be fierce and we want to continue to make our sponsors and fans proud,” Geoff said.
“Hopefully we can come away with the goods there as well.”
Another challenge for Jason will be to maintain his points lead in the AHG Sprintcar Series that will be decided
on Saturday night – heading into the series final he leads by just six points from defending champion Brad
Maiolo.